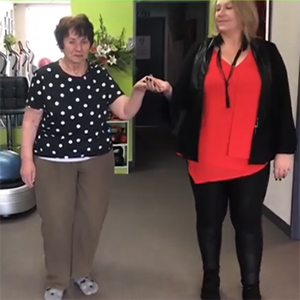 Brian and Priscilla Jones were a devoted couple happily looking forward to their retirement years together. Until their plans were turned upside down. Priscilla was an accomplished classical pianist and keen craftsperson, and Brian had formerly been a veterinary pathologist. Their world came crashing down in May 2018 when Priscilla suffered a subarachnoid hemorrhage while gardening. 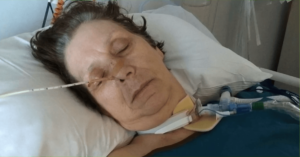 A subarachnoid hemorrhage (SAH) is an abnormal and very dangerous condition where blood collects beneath the membrane covering the brain as a result of an aneurysm or head injury. Many survivors of traumatic subarachnoid hemorrhage go on to experience permanent neurologic disabilities such as partial paralysis, weakened or numbed areas of the body, cognitive and speech difficulties, and vision problems.

Priscilla spent two weeks in a coma in ICU and a total of four months in hospital. By the end of her stay she still had weakness of her right side, limited movement of her left side and impaired speech. The hospital declared Priscilla to be a “hopeless case” requiring full-time hospital level care for life. Since Priscilla was in her mid-’60s, the District Health Board (DHB) refused to provide any rehabilitation physiotherapy due to their limited resources.

The advice the DHB provided next was the most shocking yet.

With self-funded full time care being an expensive option, and personal health insurance not being common in New Zealand, the DHB advised Brian to divorce Priscilla, and run down the value of her half of the assets to qualify for the government care subsidy.

There was no way Brian could even consider this, and took Priscilla home determined to find better solutions. Brian held on to the conviction that Priscilla would be able to regain function, which meant activating her nerves and muscles, and increasing circulation to get her back on her feet. He was acutely aware that her lying inactive in bed would result in more disastrous and rapid loss of muscle with every passing day. He committed to making sure Priscilla exercised to her limits every day – even though at this point all she could do was wiggle her toes.

Desperate for strategies, Brian recalled seeing an article in the local newspaper about a client of the Power Plate studio – FXU VIBE – who had regained her ability to walk after spending 11 years in a wheelchair. Priscilla had once been an FXU VIBE regular, attending Power Plate classes a few times a week for fitness and weight loss.

Brian held on to the hope that this might be the answer for Priscilla, and took her to meet with Monique, the founder of FXU VIBE. They made a joint commitment to not give up on Priscilla. Training on the Power Plate would be focused on regaining functional movement to help Priscilla return to as normal a life as possible.

Power Plate technology is engineered to activate the body’s natural reflex response to the vibrations, engaging muscles in a consistent and controlled manner, improving strength, balance and coordination.

Priscilla knew that her own courage, mental attitude and trust in the team and the process were going to be key to achieving meaningful goals, like climbing the stairs at home to once again share the bedroom with her beloved, baking Brian a birthday cake, or cooking him a meal.

Very soon after Priscilla had started using the Power Plate machines at FXU VIBE, Brian noticed improvements to the circulation in her legs, and greater movement in her toes and feet. Within no time Priscilla had progressed to more arm movements, passing a ball around her body to give her the motor control to brush her own hair.

Throughout Priscilla’s recovery there have been many breakthrough moments that have left people astonished. Priscilla’s church congregation, for example, were astounded to see Priscilla walk up to the altar to take communion, when they had thought she would never walk again.

Her progress also made a significant impression on a friend who had been a General Practitioner for 39 years. In this time, the GP had never seen someone with Priscilla’s level of dysfunction recover as well as she had.

Now, some 24 months later, Priscilla is once again able to play the piano, do needle point and other crafts that she loves. Her remarkable recovery can be attributed to her own steely determination, the devoted love and support of Brian, the skill of the trainers at FXU VIBE and the marvel of Power Plate technology.

A winning combination that will, without doubt, have Priscilla baking Brian that birthday cake and climbing those stairs every day.